Hydrogen gas: a promising solution for a net-zero future

Canadian governments are increasingly viewing hydrogen gas as a fuel of the future which can help Canada get to a net-zero future while still allowing for the combustible fuels that can power transportation and other uses that require combustion. Hydrogen has the highest energy content of any common fuel by weightburnable gas.  Since it contains no carbon it burns emissions-free. When hydrogen is combusted the exhaust is water. It could be the answer for global energy transition and Canada has an opportunity to be a world leader in the effort to develop and commercialize this technology.

In December of 2020, the Canadian government announced a “Hydrogen Strategy for Canada” that encourages the pursuit of hydrogen as a fuel in Canada and explores the opportunities available.

Hydrogen is literally rocket fuel. The taming of liquid hydrogen proved to be one of NASA’s most significant technical accomplishments. It has the lowest molecular weight of any known substance and burns with extreme intensity, this combination of energy capacity and light weight made hydrogen an ideal fuel for getting into space.

Unfortunately, hydrogen very rarely occurs naturally on earth, to exploit hydrogen as a fuel it has to first be produced. The problem with hydrogen now, according to Energy technology analyst José Miguel Bermúdez Menéndez of the International Energy Agency, is that it is not currently a ‘low carbon’ energy. The energy used to produce hydrogen is usually carbon-intensive energy.  Current global production of hydrogen releases 830 million tonnes of CO2 yearly, a process known as ‘grey hydrogen’ due to its carbon emissions.

However, there are low emissions options to produce hydrogen.

There is a process called “green hydrogen.” This is hydrogen made from using renewable electricity to split water (H2O) molecules to create a stream of hydrogen gas and of oxygen gas. While it sounds great, this process is lower efficiency than grey or blue hydrogen, losing 30% of the energy potential in the process.

There is also “blue Hydrogen” which is hydrogen produced from natural gas using a process in which the carbon in the natural gas is captured and recycled or stored.   This has the enormous benefit of turning fossil fuels into green energy.  Europe is betting on blue hydrogen as a large-scale solution.  Equinor, one of the largest Norwegian energy companies, explains that blue hydrogen could “be the key to keeping Norwegian gas valuable in a low carbon future”.

The Canadian Hydrogen Strategy identifies the “unique competitive and comparative advantages” that Canada has in this area and details the benefits that exploring hydrogen can have for Canadians. It calls for the development of a clean hydrogen economy to be a strategic priority for Canada.

The Canadian Government’s hydrogen strategy endorsed the blue hydrogen model as the way to go as a solution to reach Canada’s climate targets because of the opportunities and capacities that blue hydrogen offers Canada given our vast supplies of natural gas to use as a feedstock. In this they were following companies like Norway’s Equinor and France’s Engie which announced that they joined forces to develop blue hydrogen.  Alberta’s government has also announced incentives to firms who wish to join the blue hydrogen train: the province recently put out an incentive program covering up to 12% of capital costs for petrochemical companies that wish to decarbonize their operations.

Source of the graphic is from the Hydrogen Strategy: 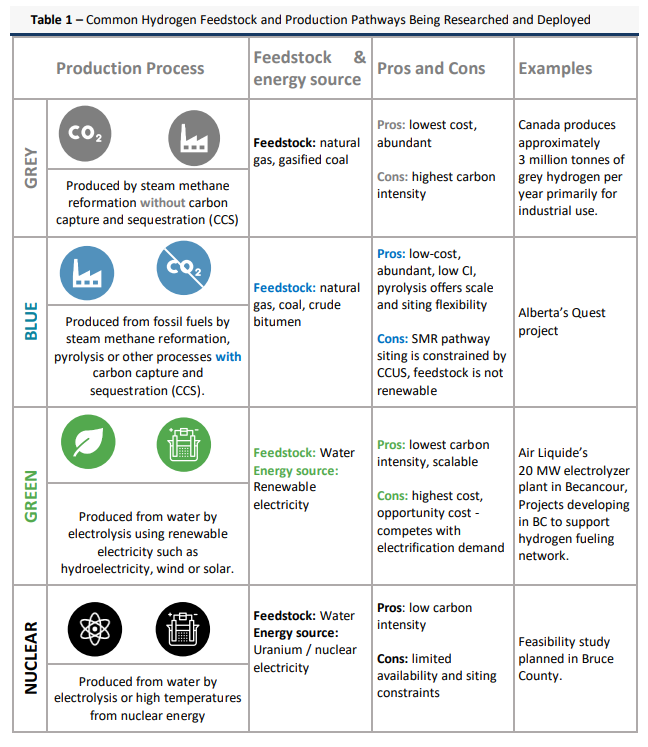