Media Falsehoods and Excessive Police Force: An account of the Montreal lockdown protest

On Saturday, March 13, 2021, thousands of Quebeckers protested in the streets of Montreal against the Legault government’s strict lockdown measures still in place despite the falling case counts across the province. The organizers of the “Marche Des Insoumis” or “March of the Rebellious” protest wrote on the event page that the protest is for people who question the government’s lockdown measures.

The March of the Rebellious is being described as the largest lockdown protest in the city’s history, amassing nearly 10,000 attendees at the height of the protest. Some people believe the protest was even larger.

Some media organizations like the Montreal Gazette and Ottawa Citizen have incorrectly labeled the protest as being a “protest against wearing masks”, while the organizers of the event clearly stated their intentions for the event in five requests and asked attendees of the protest to respect sanitary measures like mask-wearing.

The first of the five requests from organizers asked the government of Quebec to put an end to the state of health emergency that has been in effect for a year now. Second, the organizers also ask that the government offer a live public debate on CBC Radio-Canada on policies related to COVID-19 from experts of differing opinions.

The fourth request of the government is for them to provide notes on government discussions related to lockdown measures and provide scientific evidence and data to justify government decisions.

The final request by the group was for the mainstream media to present fair and respectful media coverage, which the organizers argue has not been the case.

Other mainstream media outlets like CBC and CTV News, who were not visible at the protest, have also reported falsehoods about the event. For instance, both the CBC and CTV News reported that pepper spray was used to “push back” and “disperse the small group”.

This claim is unfounded as the chemical deployed on the tail end of the protest was teargas canisters and not pepper spray, which are both chemically distinct from one another and differ in their delivery methods. At the time of deployment, the group was of at least 1,000 attendees, much more than the reported 100 attendees.

The teargas was deployed on the tail end of the protest crowd, the opposite direction from where the projectiles originated.

While I was at the protest reporting for Westphalian Times, I was struck in the face with a tear gas canister. After I was struck, those who I spoke to who had also been hit were all press and photographers covering the event.

Towards the very end of the protest, prior to the deployment of tear gas and any projectiles being thrown, the Montreal Police bused in several riot gear officers and blocked protesters in on the street (Av du President-Kennedy).

A few moments later, the Montreal police began to rush at the group without warning and struck protesters down on the cement. A man in the group overseeing the incident said on an intercom to police, “this is a peaceful protest, you don’t have to do this. People are peaceful here, you’re the violent ones. There’s a woman lying on the ground.”

It is unclear why police began to charge into the group of protesters, from my viewpoint, it happened very suddenly and without warning.

When the SPVM was contacted after the protest for comment the media representative was unaware of this occurrence and could not provide comment as to why the police initially charged at protesters.

As protesters continued to flow in on Av du President-Kennedy, the protester on the car with an intercom who was overseeing protesters being detained and fined said, “What do you want? we’re peaceful. Your tickets are illegal, you are committing assault.”

As the protest continued on Av du President-Kennedy, some protesters began to throw projectiles at the police group that engaged in the prior altercations with the group. Projectiles were not thrown at any of the other groupings of police.

The SPVM then responded to the projectiles by deploying tear gas without warning.

As the video shows, at the time when the teargas was deployed the majority of the protesters had carried on marching away from the police and the location where the altercation with projectiles took place. It is in my opinion that the teargas was not used to disperse the crowd (as the crowd was no longer in confrontation with the police) but rather in retaliation for the projectiles.

Most of the people I spoke to after being hit with tear gas were photographers and the press covering the protest.

The response from the Montreal police should have begun with a warning to the protesters to stop unlawful behaviour (projectiles) before escalating the situation, as is normally practiced by other police departments in Canada.

The SPVM was contacted for clarification on the SPVM policy for crowd control agents like teargas, however, the media representative was unable to provide information on the policy for the deployment of crowd control chemical agents like teargas. I have reached out to another representative from the SPVM over this issue and am awaiting a response.

The SPVM has a history of inconsistent policing practices when it comes to demonstrations.

For instance, in the summer of 2020 also during the pandemic, SPVM police stood by as vandals tore down the John A. Macdonald statue in Downtown Montreal without crowd control intervention.

After the statue was torn down, SPVM’s spokesperson Jean-Pierre Brabant went on to say, “the protest in general went really well,” and that it was just “the mischief at Place du Canada that was a bit negative”.

Only once the statue was on the ground in pieces did the Montreal police intervene, asking protesters to clear the area. No arrests were made, and the protesters were all free to go on their way.

On March 13, 2021, what I witnessed from even before the protest started were SPVM officers acting hostile towards protest attendees. During the first 10 minutes I was on the scene I witnessed an SPVM officer shove a man walking on the sidewalk in front of Premier Legault’s Montreal office for no apparent reason.

Before the protest began, the police said on a loudspeaker that protesters who do not wear a mask or keep a 2-metre distance may be subject to fines ranging between $1,000 to $6,000.

During the protest, attendees described many people being picked out at random by police and being fined for not wearing a mask properly. A mother of a family of four children said her husband was one who was picked at random for a $1,500 fine.

Midway through the SPVM-approved route for the protest, an SPVM bike unit was seen around 3:30 pm trying to obstruct the protesters route by standing in a line in the middle of the street.

The approved route (the incident took place at the intersection of Av Papineau and Rue Rachel E near Parc La Fontaine): 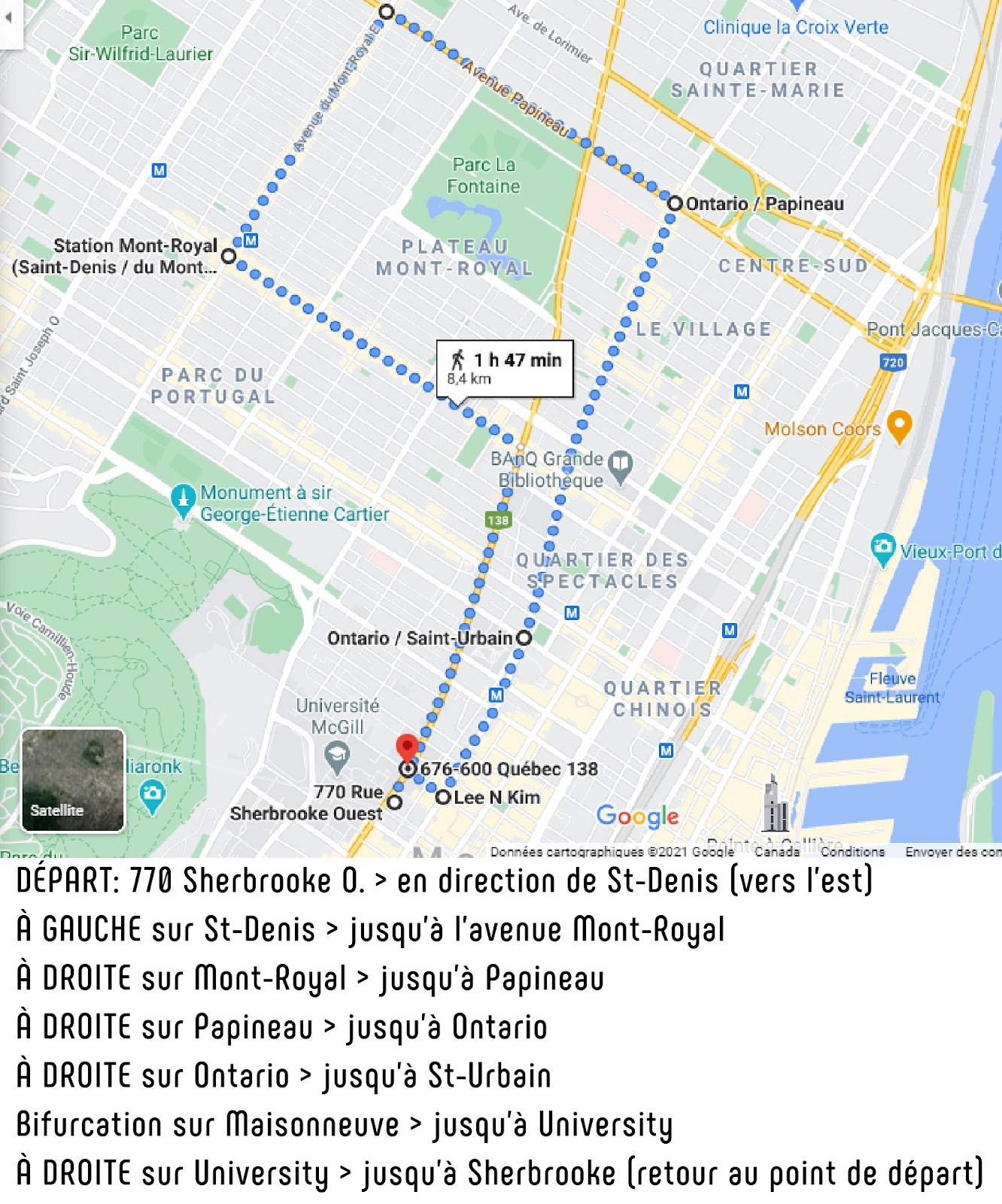 When the SPVM was reached out for comment about this incident and why some officers on bikes tried to obstruct the protester’s route, the SPVM media representative said she was unaware of this incident and therefore could not comment on it.

Other groups are now planning to hold more demonstrations across Quebec. Another protest is scheduled in Montreal on Saturday, March 20, 2021.

Here are some more images from Saturday’s lockdown protest in Montreal: